A beautiful medieval town, where Castelas Olive Oil, the best in universe, is produced. Vineyards and olive trees are all around. It is the oecumene of Provencal cooking: everything’s local and everywhere there’re traditions, own rules and tastes. I think that the most honest and edible part of the French gastronomic tradition dwells here.

The concierge advised me to visit a restaurant with a simple name of Auberge Saint-Rémy de Provence. I trusted the concierge, but when I checked up on it, turned out that the chef is a woman – not just any woman, but the winner of a national culinary TV show, and that the pastry chef is a young guy, the absolute-fucking-champion of a pastry TV show. And then, I felt a bit nervous.

It’s not that I don’t believe in the culinary genius of women, but the kitchen of a restaurant is a brutal slaughterhouse, where infernal manual labor is perfectly combined with inhuman working conditions: it’s always hot, noisy and crowded there. It’s all about screams, tension, tempo, theft, negligence, conflicts, and there are a lot of sharp corners of stainless steel all around, eternally greasy floors, lots of fire, and each participant of a conflict holds a large forged knife in his hand. It’s difficult for a woman to succeed in such conditions.

Once out of blunder I really got myself into a mess because of a female chef. Victor Ravdive, my partner from Latvia, the main and best restaurateur of the entire Baltic region, and I were searching for a chef to restart our ruined Jūrmala project with a moron name of Philippe, where local Latvians tried to feed the Jūrmalan summer residents with high gastronomy, which no one fucking wants there. So people would come and spend two hours in the restaurant, watching the turrets of the queer-like plated courses, and never come back. The guys who ran the project didn’t believe in their failure for two years and were running up a debt until they went bust and we beat the hell out of them, so they had to go to pledge their organs (otherwise they’d struggle bravely for another two years). I convinced my partners that we should have organized a homey and slightly nostalgic cuisine. We came up with a new name “Memories”, which was in accordance with local country naming. We found a chef with the Lord’s help and assistance of a Moscow agency, which bears the same name as a certain fruit (the ones off topic, won’t get it). The chef was a female and she wrote a menu, which really hit the spot; the degustation led by her wasn’t bad at all too. My friend Lesha Gubkin who used to be her employer, told us that this woman, Tatiana B., was a binge drinking monster, and that if we wanted to ruin the project, we should have urgently given her the job. Naturally, we decided that Lesha was just a dickhead and bungler in the field of personnel management, in contrast with us, who were very much not so. Being on a leash held by this monster, we bought some equipment, special utensils, paid the agency part of the fee. And then, right before presenting the menu, Tatiana lost control of herself, called all our numbers, spatting out curses at us (alcoholic paranoia attack), and disappeared from the horizon a month before the opening. So, for me a chef and a woman are different things; if a woman became a chef, one’d better look for a flaw.

I do believe in female pastry-cook. They are segregated from the “contact zoo” of the kitchen because it’s a separate department. Their work is exact and tedious, which is more suitable for women than for men, their places usually have better ventilation and they just make desserts, hand them over into the menagerie and get the fuck out through a hole in the floor.

In Auberge Saint-Rémy de Provence everything is as it shouldn’t be: their chef is a woman and the pastry cook is a man. We decide to take a risk. The restaurant is fancy, it has its own courtyard, peculiar tablecloths and the food’s beautifully plated – a truest restaurant of restaurants. They welcome you and have you seated, then the aperitifs come, sommelier, the menu – you can see marks of high quality in each detail. The female chef comes out, a live human being, quite beautiful and too subtle for such an infernal job, she extends her strong, narrow paw to shake hands with guests. It’s amazing!

The menu is rather small as it’s customary in “branded” French restaurants. We get the appetizers – vegetables from the garden, petits farcis. (Those are Provencal stuffed tomatoes, zucchini and peppers, an incredible dish, which can’t be bad, I recommend. I think that those who don’t make good petits farcis in Provence are immediately condemned to 5 years in prison – what else can explain that – I have never had it badly cooked.) We also had black caviar a la Provence. All food is very delicate, multilayered in respect of tastes and textures. The dish “Vegetables from the garden”: some vegetables are slightly baked, some are slightly boiled, some are raw; they’re sophisticatedly served, but that doesn’t look unnecessarily queer or pretentious. “Petit farsis”, I’ve never had a better one. Really, half the time I couldn’t understand the technology behind the cooking process, how is that she achieves such textures and tastes.

The main courses are Dover sole and blue lobster. I have to say that the lobster is better than the sole. Again everything’s in laces, multilayered, there’re lots of sauces and textures. It’s especially complicated with lobster, I couldn’t even understand what the pasta was made of, but obviously not of flour. At the same time there’re no excessive whims, everything’s organic and natural. The hackneyed expression “it’s melting in your mouth” is perfectly applicable in this case. The cuisine is very girlish, very delicate, lacy, light. You can tell that a straight-A student slaved over every little thing; a male chef would never be able to even plate it as she does. He’d just knock it off the table, right with his elbow, and say “I don’t give a shit”. He’d do everything much more decidedly.

Desserts are delicious; they all are mousses, turrets, curls, sauces and gravies. We ordered their four signature desserts for the four of us, and I didn’t have enough time to take a picture of them as they were immediately wolfed down. I can’t remember a single detail of any dessert, I can’t even recall the taste. The pastry cook tried to show off too hard. It would be way tastier (to my taste) if he just went for some classy apple tart tatin or any other simple yet perfect dessert. He is most evidently capable of creating desserts that are simple and perfect at the same time, but he just went too far playing with all those mousses and turrets.

Anyway, guys, you really should visit the place. The female chef Fanny Rey is a sort of a marvel! 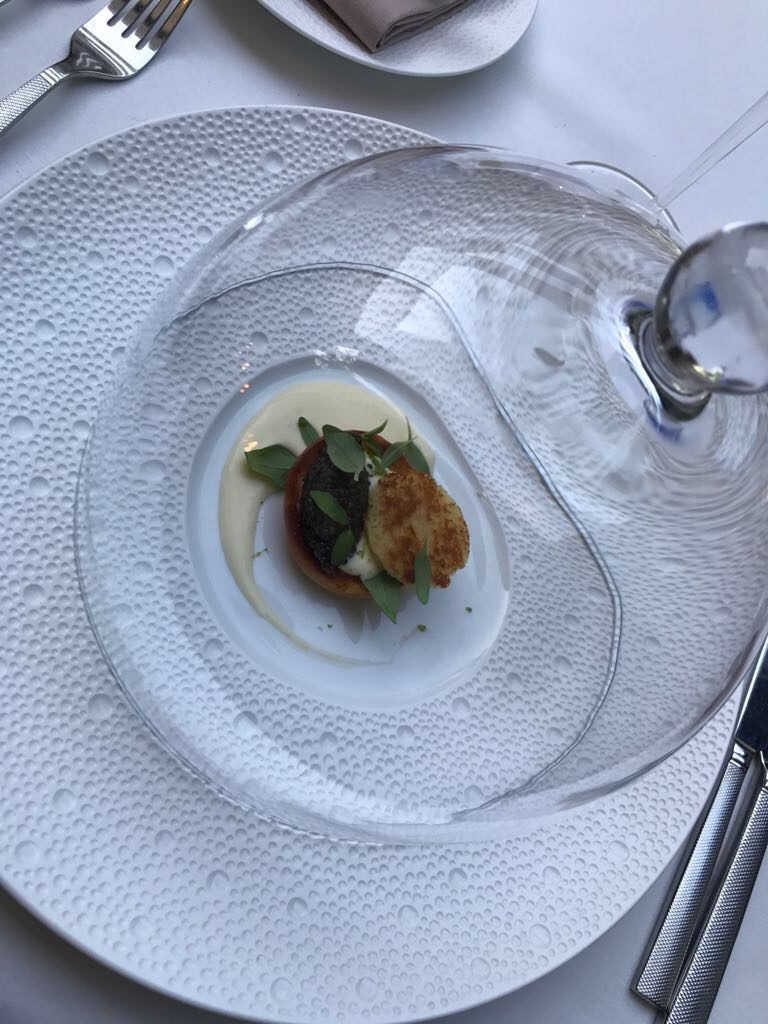 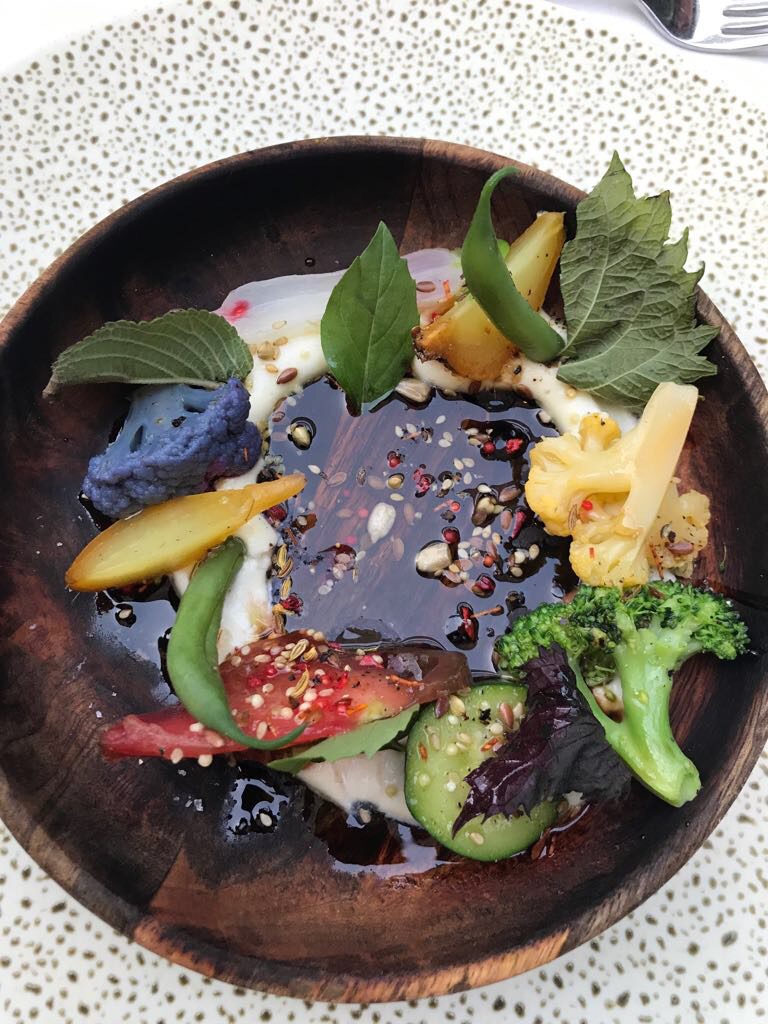 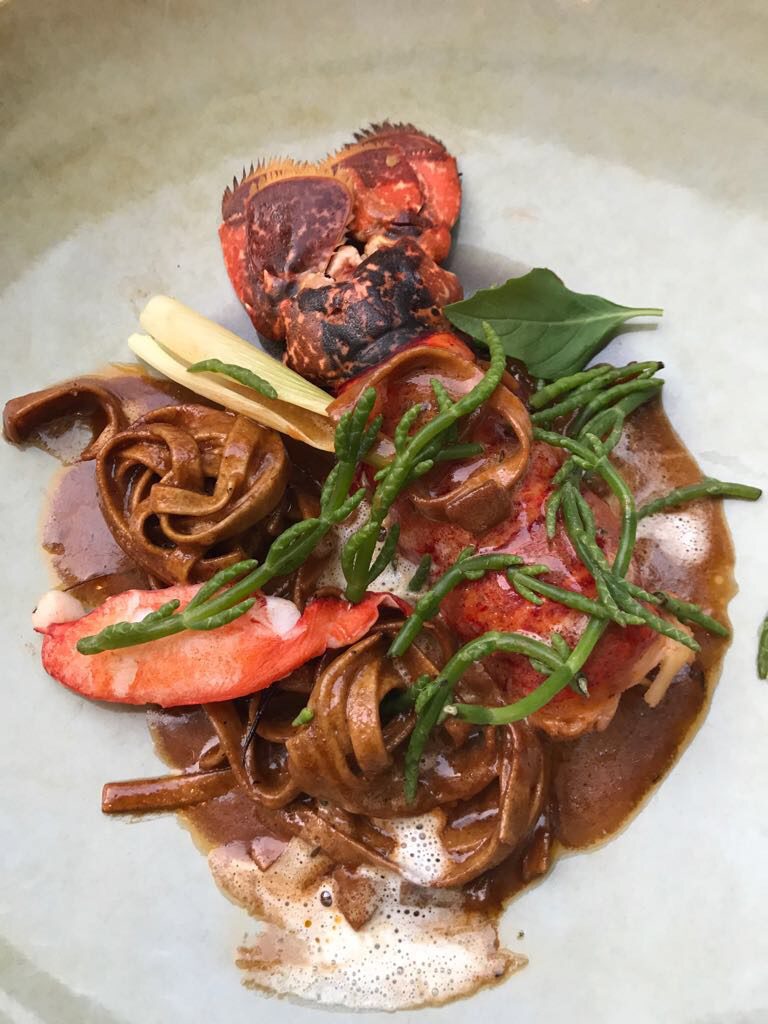 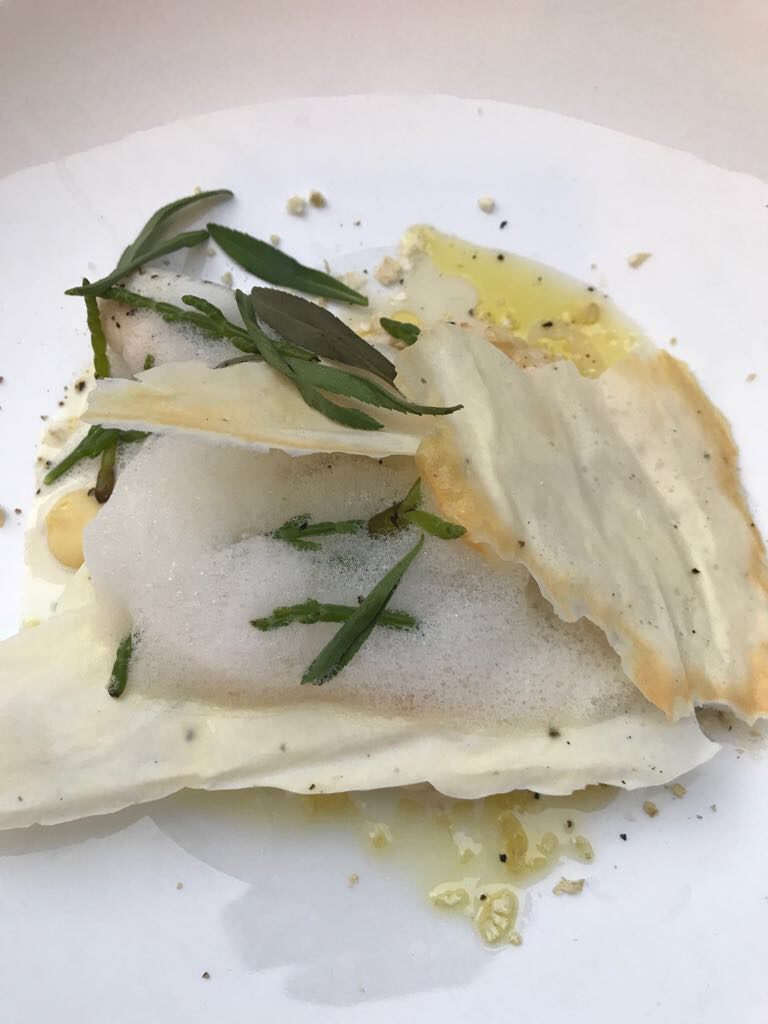 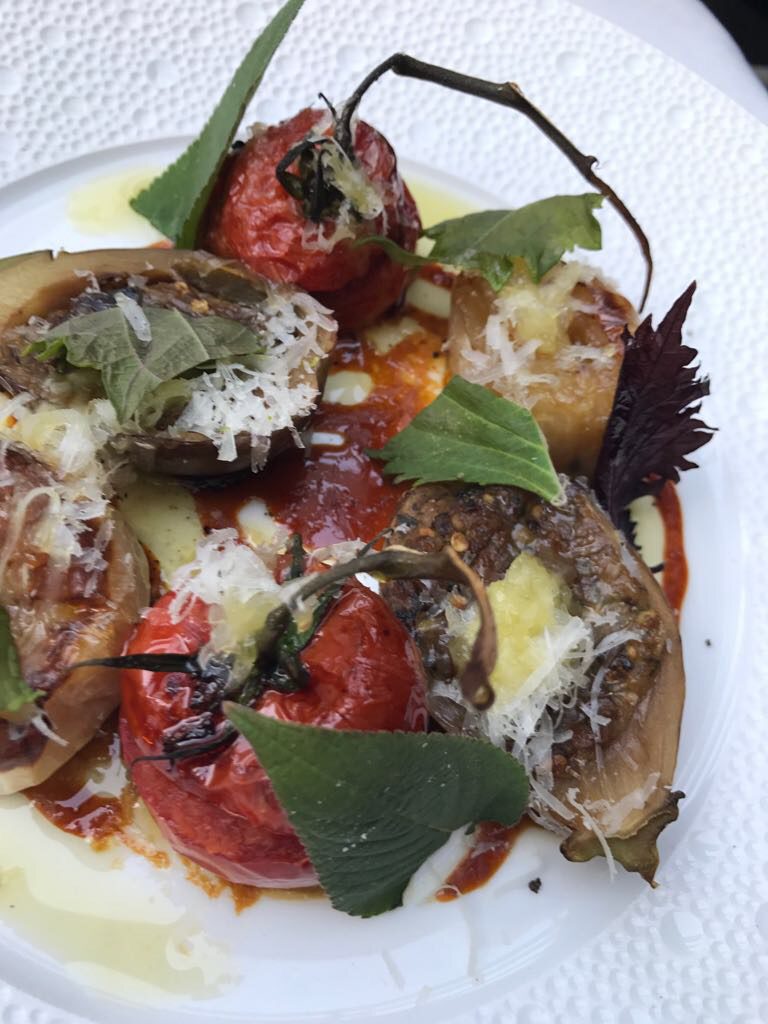 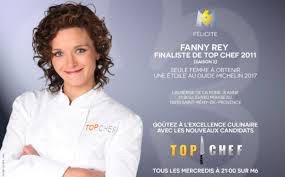 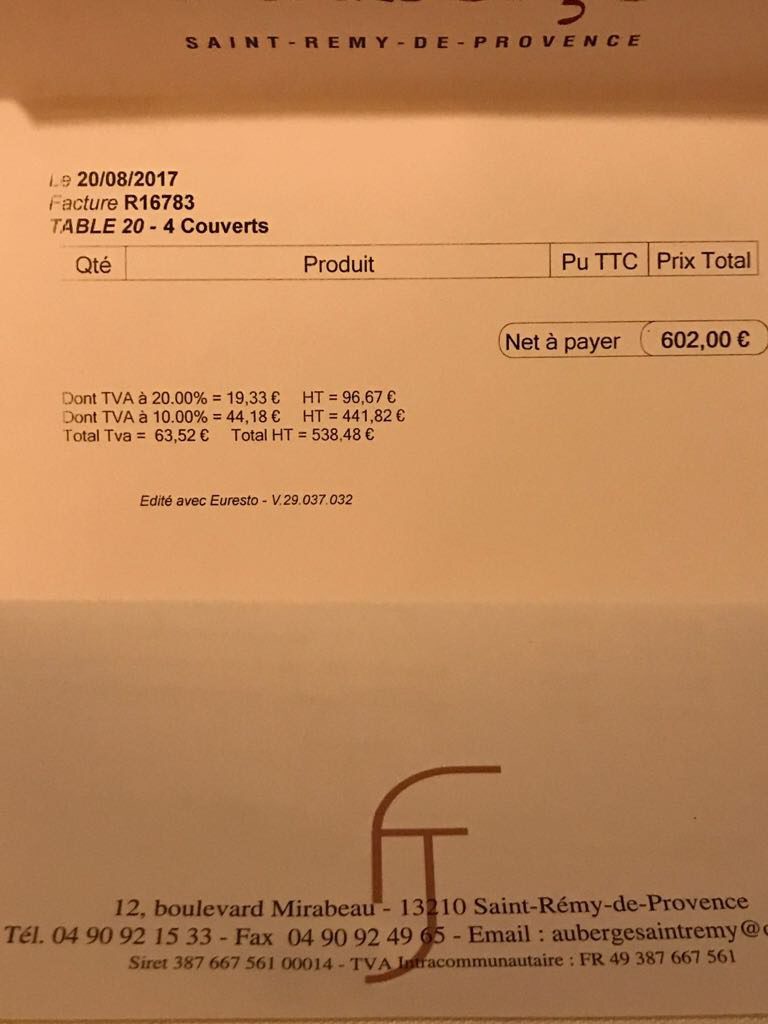 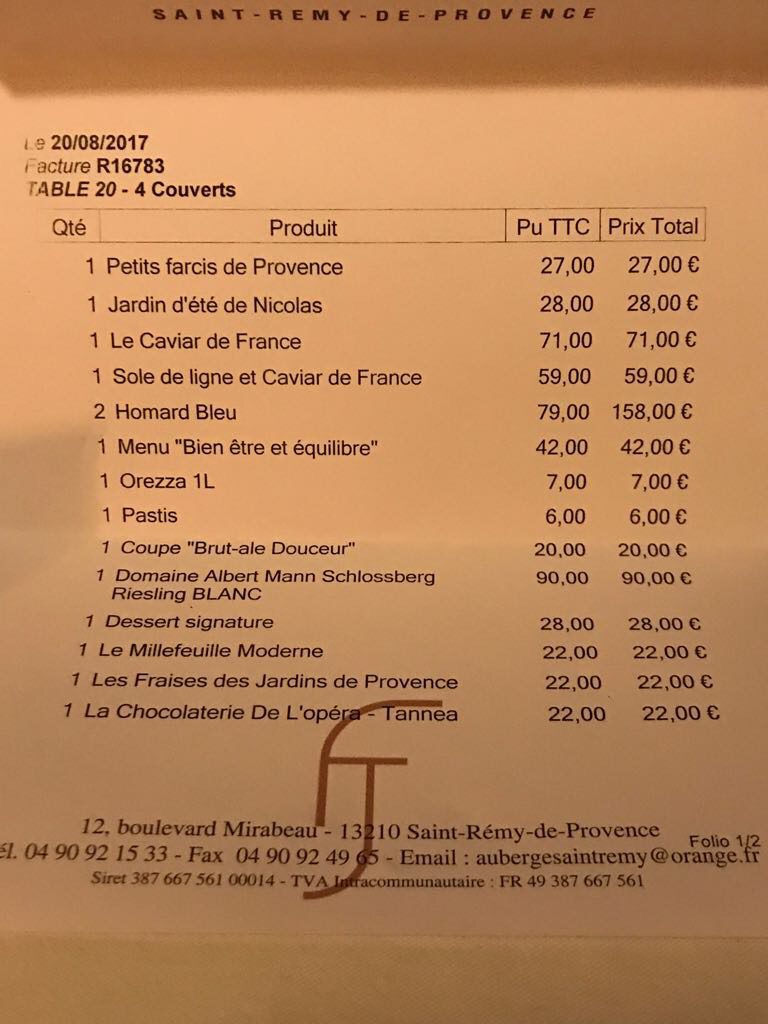 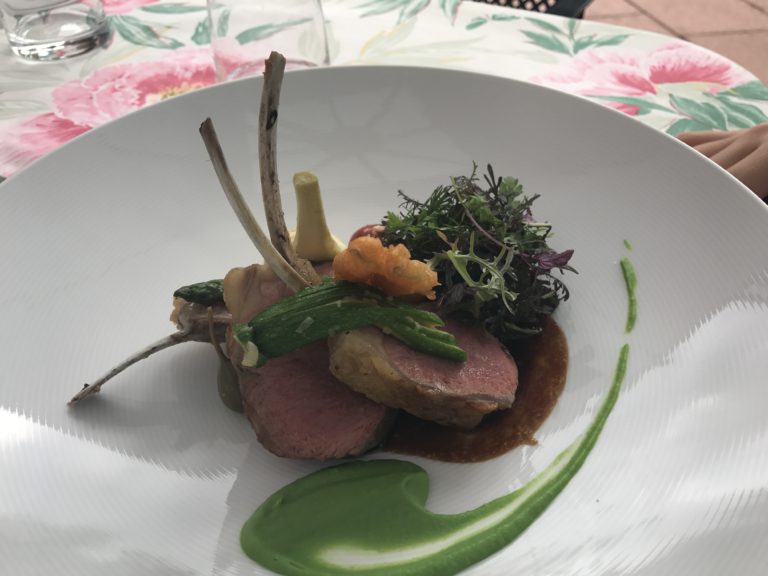 Maximilien: A Pigeon Marries a Lobster, Scampi Left for Soup. 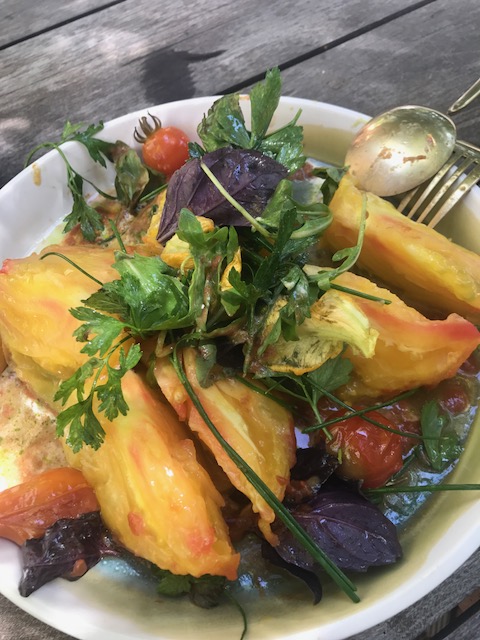